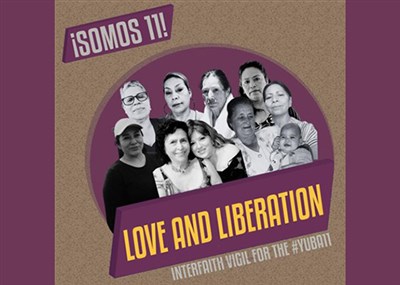 Editor's Note: On Memorial Day of this year Bishop Minerva G. Carcaño, Connectional Ministries executive Jorge Domingues and other faith leaders in California-Nevada joined an interfaith vigil at the Yuba County Jail calling for the release of 11 immigrants held in custody by ICE. ICE contracts with the Yuba county detention facility, as it does with many other facilities across the country, to jail those without proper residential documents who are deemed deportable. Click here to read our coverage of the vigil.

On Wednesday October 27th Ricardo Vasquez Cruz, the last of those #YUBA11 detainees still in custody, was released. Upon hearing the news, Jorge Domingues stated, "This fight has not ended as there is news that the county would like to repopulate the jail. We will continue to work with other organizations and churches in opposing private prisons that profit from human suffering, particularly the immigrant detention centers that keep families separated, children unaccompanied. It is against our values and faith."

The following is an article detailing the appeal by 24 lawmakers to end the ICE contract, conditions at the Yuba Co. jail, the detention and release of Cruz and follow-up with former Yuba detainees. The article was written by journalist David Wilson and first appeared in The Appeal Democrat, a regional paper covering Yuba, Sutter and Colusa counties.

Last detainee released from jail, according to immigrant advocates

Last week, 24 members of Congress signed a letter sent to the secretary of the Department of Homeland Security (DHS) calling on the agency to close two private detention facilities as well as terminate its agreement with Yuba County Jail.

The Intergovernmental Service Agreement between U.S. Immigration and Customs Enforcement (ICE) and Yuba County Jail is the last contract with a public facility in California, according to a news release from the California Collaborative for Immigrant Justice (CCIJ).

The letter to DHS cited Yuba County Jail’s consistently unsanitary conditions and low population. It mentioned that Yuba County Jail has been subject to a federal consent decree since 1979. The decree was amended in 2018 and requires the county improve conditions at the jail including providing timely medical care, changing the physical structure of the jail, and providing mental health care and suicide risk assessments for certain detainees.

An April inspection from the ICE Office of Detention Oversight found 31 deficiencies and found that Yuba County Jail was in compliance with only half of the 18 ICE detention standards, according to the letter.

Yuba County Sheriff’s Office spokesperson Leslie Williams said the jail had two successful ICE inspections of the facility and programs in recent months and the sheriff’s office praised jail division staff in an Oct. 22 Facebook post. Williams said the jail is in compliance of the consent decree and that all structural changes that are required have been completed. The final structural change is currently under construction and will be completed by the required December deadline, according to Williams.

On Wednesday, Ricardo Vasquez Cruz, the last individual detained by ICE at Yuba County Jail, was released after spending three years at the jail. He was detained because ICE believed Cruz to be a deportable noncitizen, CCIJ Communications Manager Laura Duarte Bateman said. She said Cruz suffers from several medical conditions including diabetes, hypertension, and gastroesophageal reflux disease.

“He has been suffering from excruciating stomach pains for months and was not provided adequate treatment or diagnosis from Yuba County Jail,” Bateman said in an email. “They told him he was getting an endoscopy weeks ago and today (Wednesday) he leaves without it being done.”

The letter to DHS said conditions at the jail have led to repeat protests and hunger strikes when formal complaints were mishandled.

The jail receives $158.13 per day for 150 detainees housed and an additional $13.79 per day for every detainee over 150 as part of the agreement, according to Williams.