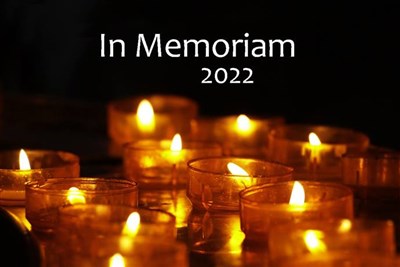 United Methodists over the past 12 months have marked the passing of a storied NFL coach, a beloved Christian contemporary music artist, the denomination’s first Asian American bishop and a pastor named Bible.

Here are 40 remembrances, listed in order of date of death. This list includes four deaths from late 2021.

A half century ago, Bishop Wilbur Wong Yan Choy made national headlines with his election as The United Methodist Church’s first Asian American episcopal leader.

Fellow United Methodists say the bishop did not just blaze a trail for himself but also opened pathways for other pioneering leaders across the church. Friends also remember him for his great sense of humor.

Choy died Dec. 28, 2021, in Seattle at age 103. His legacy includes a denomination that, thanks in part to his ministry, has grown significantly more ethnically and racially diverse since his election.

The son of Chinese immigrants initially served as an elder in the California-Oriental Provisional Conference, comprising Chinese, Korean and Filipino churches in the state. He chaired the Integration Committee that guided the provisional conference’s 1952 merger with geographic Methodist conferences.

The Western Jurisdictional Conference elected Choy to the episcopacy in 1972. He went on to lead the Pacific Northwest Conference for eight years and the California-Nevada Conference for four before retiring in 1984. His episcopal colleagues chose him to serve as the Council of Bishops president in 1983-84.

“I remember him for radiating the joy of the Lord, and his graciousness to all people. It was just infectious,” said retired Bishop Roy Sano, who was elected as the denomination’s first Japanese American bishop the same year Choy retired.