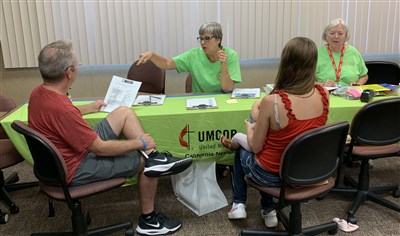 The McKinney Fire started on July 28th and remained active for 26 days. Over 60,000 acres throughout Siskiyou County, in far Northern California, burned with the destruction of 185 structures, 87 homes, and the loss of four lives.

Along with State and County agencies, and a variety of non-profit organizations, the California-Nevada Conference Disaster Response Ministry participated in the McKinney Fire’s Local Assistance Center in Yreka.  Three Early Response Team members from Lynnewood United Methodist (Pleasanton) were assisted by two members of Yreka United Methodist.  It is extremely helpful to have the local folks offering their knowledge of the people, the areas affected by the fire, and their continued support with follow-up calls to the people we served.

All who visited our table shared challenging situations and significant interruption to life as they had known it!   Some were embarrassed to be seeking assistance. Others were devastated by the loss of their homes, photographs, animals, and tools for their employment.  We offered a compassionate ear to stories of those whose homes were severely damaged or destroyed. We heard of the escape and fear of folks who were evacuated.  Interviews of over 90 people resulted in the distribution of fire buckets, tools, sifters, cleaning buckets, wildfire cleaning kits, hygiene kits, PPE kits, school kits, tote bags, and gift cards.

We, along with those survivors we served, express grateful appreciation to congregations across the Conference for their generous donations and offerings of hope!

One woman whose home was completely burned was also grieving the death of her uncle who was consumed by the fire as he remained to protect his property.

A middle-aged man was eager to accept tools, a sifter, and fire bucket to locate his wedding band.  He broke into tears when he shared that years ago his wife and 14-month-old daughter had died in a car accident. The hurried evacuation resulted in leaving behind the ring—a symbol of the love and fond memories of his beloved family.  The total loss from the fire rekindled raw feelings and the greater loss of the past.  Through tears, he expressed the significance of the ring was far more valuable than his burned down home!

A group of neighbors from Klamath River who lost their homes greeted one another knowing they were alive and safe!  When they were ready to leave our area, they formed a circle, accepted a bottle of water, and toasted one another with hugs, smiles, and love! Not only did we observe the import of relationships, but also, we were touched by their resilience, optimism, and hope!!
Mary Ellen Huey is a member of the Cal-Nev Conference Disaster Response Ministry Leadership Team.