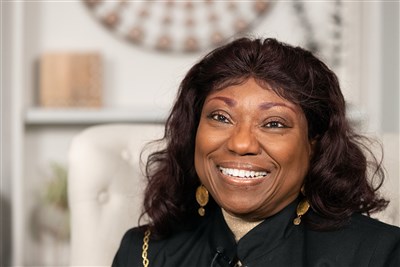 The Rev. Cynthia A. Wilson will lead the Junius B. Dotson Institute for Music and Worship in the Black Church and Beyond, a partnership between Garrett-Evangelical Theological Seminary and Discipleship Ministries. Wilson, an accomplished Gospel music singer and church leader, worked with Dotson at Discipleship Ministries. Photo by Mike DuBose, UM News.


When the Rev. Cynthia A. Wilson worked with the Rev. Junius Dotson at Discipleship Ministries, he decided to learn to play the piano.

At any time during the day, the piano near her office might ring out.

It was Dotson, chief executive of Discipleship Ministries, practicing.

“He became a consummate pianist playing blues and jazz and gospel,” Wilson remembered. Although Wilson, an accomplished Gospel music singer and church leader, gave Dotson some pointers, he was largely self-taught, she said.

So it’s appropriate that Wilson is heading up the new Junius B. Dotson Institute for Music and Worship in the Black Church and Beyond, which will provide training for musicians and worship leaders in the sacred music of Africana church traditions. It is being established in partnership with Garrett-Evangelical Theological Seminary.

The institute, which received $500,000 in initial funding from Discipleship Ministries, is having an inaugural event Aug. 18-20 at The American Hotel Atlanta Downtown.

United Methodist News posed some questions to Wilson about Dotson, who died of cancer at age 55 in February 2021, and the institute named in his honor.

The interview has been edited for brevity.

UM News: Can you share your vision for the institute?

Wilson: It is a place to provide training and sharpen the skills of persons who are serving in local churches but have not necessarily had formal training in the areas where they are serving. For instance, many of the choral directors, many of the organists, a lot of the folks who are doing liturgical dance, folks who are serving in sound and lights, these are people who are volunteering but are learning as they go. The institute will be that place where they will hone those skills sitting at the feet of practitioners, those who are still practicing and those who may be retired but are interested in mentoring others. They can not only sharpen their skills, but they can make connections with others who are doing what they’re doing.

Patterson is a UM News reporter in Nashville, Tennessee. Contact him at 615-742-5470 or newsdesk@umcom.org. To read more United Methodist news, subscribe to the free Daily or Weekly Digests.