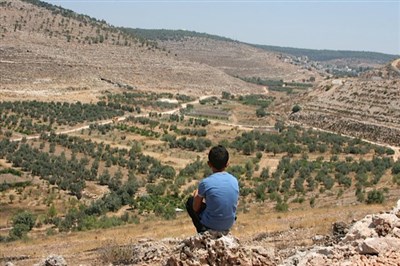 Editor's note: The United Methodist Church, through its General Board of Global Ministries (GBGM), supports a community development project in the Palestinian village of Wadi Foquin. The church's involvement began in 2009 with modest fundraising for beehives to help offset damage inflicted on agricultural life by the nearby Israeli settlement of Betar Illit. The project was initiated by Buena Vista United Methodist Church in Alameda, Calif., with help from Janet Lahr Lewis, then UMC Liaison to Israel and the Occupied Palestinian Territories. Trinity United Methodist Church, Berkeley Methodist United Church, other San Francisco Bay Area churches, and community members have joined the partnership since then, and a new project has been added every year. Operating under the name Friends of Wadi Foquin, the organization has worked to provide financial assistance for projects supporting the economic survival of the village, made annual visits to Wadi Foquin, and—as the village has come under increasing threat from settlement expansion—advocated for its survival on Capitol Hill. The Cal-Nevada Israel-Palestine Task Force of the United Methodist Church has also provided support for the partnership.

Find out how you can engage with, travel with, and advocate for this exciting United Methodist ministry during a webinar on Wednesday September 7th at 10a.m.

Representatives of Friends of Wadi Foquin, Rev. Michael Yoshii and Mike Friedrich, will present successful and ongoing advocacy efforts on behalf of the Bethlehem district village of Wadi Foquin during a webinar on Wednesday September 7th at 10 a.m. You will also hear from villagers themselves. The discussion will include tangible ways you - and your congregation - can get involved, as well as plans for a 2023 delegation to the village and the Holy Land.

The Israel Palestine Taskforce, a member of the California Nevada Annual Conference Advocacy and Justice Committee, has worked closely with Friends of Wadi Foquin since its inception.  Engagement with the people of Wadi Foquin provides human to human connection, helping hundreds of United Methodists more deeply understand the oppression faced by Palestinians, their struggle to live their lives and care for their children, and hope for the future.


Click here to register for the webinar.
Patricia Daughtery is a member of the Conference Committee on Advocacy and Justice and serves on the Conference Task Force on the Criminalization of Children.