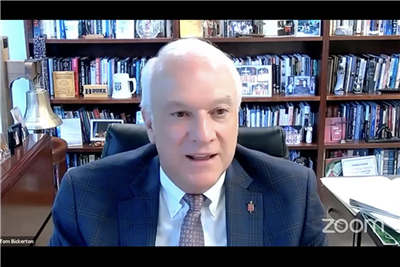 Amid a summer of denominational discontent, Council of Bishops President Thomas J. Bickerton called on fellow bishops and church members to begin pivoting The United Methodist Church toward a hope-filled future.

Bickerton also decried what he called “a constant barrage of negative rhetoric that is filled with falsehood and inaccuracies” coming from backers of a breakaway theologically conservative denomination that launched in May.

He specifically disputed claims that United Methodist leaders are abandoning the denomination’s doctrinal standards in the Articles of Religion, that they do not embrace the primacy of the Bible and that they do not believe Jesus Christ is the son of God.

While The United Methodist Church will maintain basic Christian teachings and its historic roots in Wesleyan theology, Bickerton said he does expect United Methodists to make changes. Those changes include recapturing a spirit of evangelism, practicing the church’s theology of mission and confronting the sin of racism.

“It is time, in our role as leaders, to initiate a conversation about what it is we want and dream about as a church moving forward,” Bickerton said Aug. 22 in his first formal address as the bishops’ president. “What do we see as the next expression of Methodism? What kind of church do we envision in the ongoing United Methodist Church?”

Bickerton also leads the New York Conference. The address is archived on the Council of Bishops Facebook page.

The Council of Bishops is meeting this week to discuss various challenges facing the denomination and to begin planning for its future. The next open session will be on the bishops’ Facebook page at 9 a.m. U.S. Eastern time April 26.

The bishops are gathering at a time when a number of congregations and church leaders are trying to discern whether they want to remain part of The United Methodist Church.

After decades of intensifying disagreements about the status of LGBTQ people in the church, General Conference — the denomination’s top lawmaking body — was set to vote on a denominational separation plan in May 2020.