Bishop Minerva G. Carcaño Holy Week Saturday Meditation: Sitting in silence and wondering if the grief will ever pass… 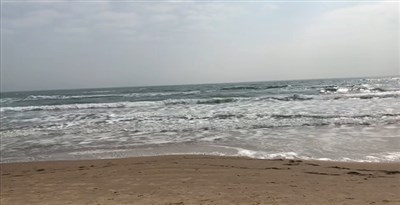 Bishop Minerva G. Carcaño shares a message for Holy Saturday of Holy Week grounded in Mark 15:42-47 in which she invites us to sit in silence and wonder with her if the grief will ever pass.

You may also read the text of Bishop Minerva's message here:


The Burial of Jesus
42 It was Preparation Day (that is, the day before the Sabbath). So as evening approached, 43 Joseph of Arimathea, a prominent member of the Council, who was himself waiting for the kingdom of God, went boldly to Pilate and asked for Jesus’ body. 44 Pilate was surprised to hear that he was already dead. Summoning the centurion, he asked him if Jesus had already died. 45 When he learned from the centurion that it was so, he gave the body to Joseph. 46 So Joseph bought some linen cloth, took down the body, wrapped it in the linen, and placed it in a tomb cut out of rock. Then he rolled a stone against the entrance of the tomb. 47 Mary Magdalene and Mary the mother of Joseph saw where he was laid.
Mark 15:42-47 NRSV

Sitting in silence and wondering if the grief will ever pass……..
After the death of a loved one I have always experienced a silence.  It is as if the world as we know it stops.  The day after Jesus died it was as if the world stopped.  The biblical narrative ends at dusk on the day of Jesus’ death and nothing is known about that Saturday before Easter Sunday.

On Good Friday Joseph of Arimathea gathers up all his courage and asks Pilate for Jesus’ body.  Pilate had not expected Jesus to die so quickly.  But Jesus was dead.  Pilate gives Joseph our Lord’s body.  Hurrying because Sabbath was upon them, Joseph wraps Jesus’ body in linen cloth, places it in a freshly hewn tomb and closes it by rolling a stone against its entrance.  Mary Magdalene and Mary the mother of Joseph observed it all from a distance.

Then there was silence.  A night and a full day passed in silence.  It was a time of waiting, sitting in grief, wondering if the grief would ever pass.

On this Holy Saturday of silence and waiting I want to give witness to the faithfulness of God and the power of the prayers of the faithful.

Thirty-seven years ago, my brother Paul was murdered.  His body vanished never to be found.  There were too many signs to negate that he had encountered his death, but even then, without a body we held on to hope.

I was serving as the pastor of El Divino Redentor United Methodist Church in McAllen, Texas, a loving and prayerful congregation.  They supported me, ministered to me in my grief and prayed for my family and for me without ceasing.  One night at a midweek home prayer gathering the leader for that night’s time of prayer told me that he and others had decided to spend the time praying for God to reveal to us where my brother was.  The people of my church held out hope that my brother was still alive.

In a small dimly lit apartment, this faithful group of loving church members gathered with me in a circle and prayed.  The lay leader would speak to us words of encouragement and then invite us to pray in silence.  After some silent prayer time punctuated with cries asking the Holy One to speak to us the leader would end the round of prayer with a firm, “Hear us, oh Lord,” then would ask us if God had revealed anything during our prayer time.  Some shared images of places they saw in the prayer time while others shared feelings of love, peace and comfort they had felt as we prayed.

I too had experienced something arising in my spirit but at the same time I felt that I was being called to silence and further attentiveness.   We prayed for three rounds that seemed brief but were actually long stretches of deep prayer.  In each round I caught a glimpse of something that pulled me in and would not let me go.

During the first round of prayer I saw mounds of sand with green flowering vines so familiar to my family. I recognized them.  They were the sands of South Padre Island, 70 miles from our home and where we would pitch a tent in the summer for the only vacation we could afford.  I wondered why this memory was surfacing for me in that moment when what I yearned for was to know where my brother was.  When the leader of our small but fervent prayer group asked if we had received any word from God in our prayers, I held on to mine not knowing what to make of it.

We prayed a second round and the image of the mounds of sand of our beloved place of summer rest appeared before me more quickly and then stretched out to a rocky place.  As I considered that rocky place a dark stream began to slowly flow from the rocks and then gushed forth.  As I looked at the evolving scene before me, I realized that it was blood flowing and staining the pristine sand of that beautiful sandy beach.

When I saw the blood beginning to flow then gushing forth, I felt a jolt of anxiety, profound sadness and even fear but I could not look away.  I was relieved when the prayer leader called us back from our prayers.  Again, he asked whether God had spoken to any one of us.  I could not speak even as others looked my way for a word.

A third time we prayed and the picture that I believe the Holy Spirit was allowing me to not only see but enter into came rushing back – the mounds of sand, the rocky place, the flow and then the violent gush of blood.  But then the river of blood running across the sand slowed to a trickle and then stopped.  I prayed through my breath while being held up by the persons standing beside me holding my hands, connecting us all in that circle of prayer and faith.

As I waited upon the Lord, the dark evening contained in that dimly lit apartment became as bright as day.  My eyes were closed but I felt warm light descend upon my eyelids and upon my heart that yearned for light in the darkness of death.  I breathed in what I am sure was the loving presence of God among us and then I saw him.

On the edge of the beach as it welcomed the lapping waves of the Gulf of Mexico in the brightness of day was my brother Paul. He was 27 years old when he was murdered but as I saw him in that moment he was once again my beautiful little brother with his curly sandy colored hair and his loving hazel eyes and his joyous smile.  His body was a radiant light, but it was him.  Perfect and whole.

Our leader prayed a closing prayer after inviting us to share.  While we may not have received a word of revelation from God that night he assured us that there was no doubt that God was with us, my family, me, and my brother Paul; with all of us as we placed our trust in God’s faithfulness.  I knew our leader was disappointed that our prayers had not been answered on that night.

I went home and kneeling beside my bed I prayed throughout the night.  I needed for God to affirm for me that my understanding of the vision that had come to me through the prayers of the faithful was true.  As night began to transition to day I received God’s blessed affirmation.

I got up from my knees, got dressed and went to tell my mother what I had come to know through prayer.  My mother had been crying for weeks, distraught to a degree I had never seen before in her.  Day was barely breaking through when I arrived.  My mother had already made coffee and was sitting at her kitchen table.  I told her that I had something to tell her.  It was as if she were waiting for me.

I sat next to her took her hands in mine and shared with her the vision I had received in prayer and what I believed it meant.  Softly, gently, not wanting to further break her heart, I told her that my brother had lived his life on a path we did not fully know.  He had faced a violent death but now he was with God who had made him well and restored his joy, not unlike the joy he had always had as a child.
I told her I believed it was a vision from God for all our family to comfort and strengthen us.  My brother, her son, was not dead.  He was alive in God’s eternal care, at peace.

My mother nodded and her tears of many weeks ceased as if washed away as we prayed together.  Her strength in the days and years to come amazed me, but I knew it was God upholding her and all of us.

I then got up from my mother’s table and went immediately to tell the brother who had led the prayer time the night before that indeed God had spoken to us.  I shared with him what God had revealed to me.  He listened with awe at God’s wondrous faithfulness. I will never forget this beloved brother in the faith. I am bound to him forever knowing that it was his fervent prayer that opened my heart to receive what God had for me.

The beach you see before you with the waves flowing upon it is where I saw my beloved brother Paul, filled with joyful life in God’s eternal care bringing me peace to share with my mother.

I believe that the words of the Psalmist are faithful and true.

The Lord is our refuge.
Through his righteousness he delivers us.
He always inclines his ear to us and rescues us speedily.
The Lord is a strong fortress to save us.
He leads and guides us.
He saves us from all harm and from those who seek to harm us.
The Lord makes his face shine upon us
And saves us with His steadfast love.*

As we live in the grief of this Holy Saturday in its silence and its unknowing, and with any other grief we may be carrying with us, let us gather close to one another, praying for one another, and asking God to show us signs of his eternal care for the ones who have gone before us and for us who wait and wonder.

Blessed Holy Saturday to all of you, beloved ones.  Let us pray together for the rising of Easter Sunday in all it’s glory!  God is with us!

Bishop Minerva G. Carcaño is Resident Bishop of the California-Nevada Conference of The United Methodist Church.