Bishop Minerva G. Carcaño Holy Week Friday Meditation 2021: I wonder what it felt like to be at the foot of the cross when Jesus died... 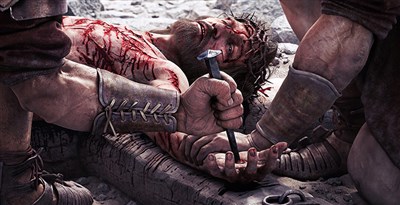 Bishop Minerva G. Carcaño shares a message for Good Friday of Holy Week grounded in Mark 15:25-37 in which she invites us to wonder with her what it might have been like to be at the foot of the cross when Jesus died.

You may also read the text of Bishop Minerva's message here:


25 It was nine o’clock in the morning when they crucified him. 26 The inscription of the charge against him read, “The King of the Jews.” 27 And with him they crucified two bandits, one on his right and one on his left.[e] 29 Those who passed by derided[f] him, shaking their heads and saying, “Aha! You who would destroy the temple and build it in three days, 30 save yourself, and come down from the cross!” 31 In the same way the chief priests, along with the scribes, were also mocking him among themselves and saying, “He saved others; he cannot save himself. 32 Let the Messiah,[g] the King of Israel, come down from the cross now, so that we may see and believe.” Those who were crucified with him also taunted him.
33 When it was noon, darkness came over the whole land[h] until three in the afternoon. 34 At three o’clock Jesus cried out with a loud voice, “Eloi, Eloi, lema sabachthani?” which means, “My God, my God, why have you forsaken me?”[i] 35 When some of the bystanders heard it, they said, “Listen, he is calling for Elijah.” 36 And someone ran, filled a sponge with sour wine, put it on a stick, and gave it to him to drink, saying, “Wait, let us see whether Elijah will come to take him down.” 37 Then Jesus gave a loud cry and breathed his last.
Mark 15:25-37 NRSV


I wonder what it felt like to see Jesus crucified……
Every year we come to Good Friday and we remember that it was a cruel day.  The goodness in Good Friday was that on that day Jesus redeems us from death and gives us life.  But in the moment, it was a terrible day, a barbaric day felt most deeply by those who were there.  The crucifixion of Jesus was a very public and very political execution by crucifixion.

We tend to distance ourselves from the barbarism of crucifixion, but if truth be told, we continue to execute persons and do so in barbarous ways.  There is no other way to describe electrocution, the gas chamber, hanging, the firing squad and lethal injection; all methods of execution used in the US today.

As of October of last year, there were 2,553 death row inmates in the US, a fluctuating number as more are convicted, some convictions are overturned, or some die including by execution.  Most notable about this list is that 41.6% of those on death row are African-American even though African-Americans are only 13.4% of the total population of the country.  African-Americans are only 13.4% of the US population yet they are 41.6% of those on death row?  There is something very wrong with this picture worthy of our attention.

What we know is that racism and racial inequity cause greater poverty for people of color, fewer socio-economic opportunities for African-Americans and other communities of color, and the early criminalization of young people of color contributing to the creation of a school to prison pipeline.  Segregation has been replaced by mass incarceration.  Racial bias has created a society where people of color are viewed as less than, unworthy of empathy, care or justice.

What does this have to do with Good Friday?  Everything!  Jesus died on the cross, executed by the authorities of his day because he challenged all the injustices that take the lives of the children of God.  He also died for the redemption of those who caused the injustices that even back then affected some younger, oppressed and imprisoned some longer, and executed too many from the same families.  It is for the sinful and the thoughtless that Jesus lifts-up his voice in a plea to God: “Father, forgive them; for they do not know what they are doing (Luke 23:34).”

But as a post-crucifixion people we do know what we are doing.  It takes just a little bit of effort to learn why African-Americans are executed in this country at such a high percentage rate and what happens to their families along the way.  I commend to you the book, Just Mercy:  A Story of Justice and Redemption written by Bryan Stevenson.  There is also a study guide for the book that makes an excellent resource for study and reflection in our congregations. With compassion and a vision of justice Stevenson challenges bias against people of color and the poor.  As the executive director of the Equal Justice Initiative in Montgomery, Alabama, he has gained release and relief for a number of condemned prisoners among them death row inmates by digging deep into what got them there.

We know what got Jesus there – to his execution.  He threatened the status quo challenging systems that left some hungry, homeless, ill, marginalized, enslaved and even executed.  Jesus boldly named every sin that alienates persons from God and one another.  For this he was crucified.  He was innocent but is condemned for speaking the truth about injustice, for being a light in the darkness.

Mothers lose the glimmer in their eyes, fathers age before our own eyes, spouses fall into depression and anxiety, the development of children is often stunted.  Everyone’s life is impacted not just the one who is executed.

It was wrong to execute Jesus.  It must have felt like hell to Mother Mary, to Jesus’ beloved disciples and all who had placed their hope in him.   His execution was wrong, but so is the execution of those he loves and dies for.  Let us not forget that he died for all of us.

May I ask you to sit with me on this day and consider how the execution of Jesus must have felt for those who were with him.  But I also ask that you consider with me how it must feel to our Lord’s heart on this Good Friday as he sees the execution of others, many of whom get there because of the injustices that have crippled their lives.

As we sit in the darkness of this day can we join Jesus in praying and working for the day when executions are no more because the love of God is how we live and the light of Christ is what lights our path.

May God bless you on this Good Friday.

Bishop Minerva G. Carcaño is Resident Bishop of the California-Nevada Conference of The United Methodist Church.