In 1989, there were three Methodist congregations in Cambodia. Today, there are more than 150, most served by indigenous ordained or lay pastors. Since 1998, Methodist mission groups from five countries – the U.S., Korea, France, Switzerland, and Singapore – and the World Federation of Chinese Methodist Churches, have worked together, moving toward what is expected to become an autonomous Methodist Church in Cambodia.

Cambodia today is a country that has been historically colonized, occupied, and ravaged by war at the hands of Pol Pot in the "killing fields," but which remains passionate to thrive. Cambodia is a Buddhist country; only about 2% are Christian and only about 5,000 people are Methodists. The country has a population of 14,080,653 (2006) and due to the "killing fields" 70-80 percent are youth, children, and young people no older than 30 years of age.

To date there are officially 13 UM mission initiatives in 18 countries across the globe. Cambodia is one of them, and is among the earliest and the largest of these initiatives.

United Methodists in California and Nevada have a long connection with the effort to develop congregations and leaders in Cambodia – an effort that has been spearheaded by Cambodians who learned of Christianity through Church humanitarian aid in refugee camps. Four of 10 United Methodist missionaries sent by the Church's Global Ministries agency are from California: Joseph and Marilyn Chan, Katherine Parker, and Romeo del Rosario, who heads the group. The missionaries engage in a broad range of church development, education, and health/social service ministries. Rev. Chan works in church planting, Marilyn Chan in women's empowerment, and Katherine Parker in community health and agricultural development abd several missionaries work specifically with women and children.

In February 2010, a visit to Cambodia by a California-Nevada leadership team led by Bishop Warner H. Brown, Jr. revealed a specific and urgent need for new vehicles to replace the mechanically unreliable, dilapidated, and ancient trucks that are currently used for travel on unpaved roads. Safe and reliable vehicles are critical for connecting the far-flung Cambodian congregations with each other for mutual support and for connecting the distant rural communities with health, education, agricultural, social service, and development resources that are only centrally available. The 2011 Annual Conference Session offering was designated for the Methodist Mission in Cambodia.
We ask that you keep the churches and missionaries on the ground there in your prayers. We also invite you to support Cambodian mission with your prayers, talents, skills, and finances – to engage in Extravagant Generosity in the best way you can.

Street scene in the Cambodian Village of Char.

Irene Mparutsa, on the right, a United Methodist missionary, discusses the proper use of a water filter with women in the Cambodian village of Talom. 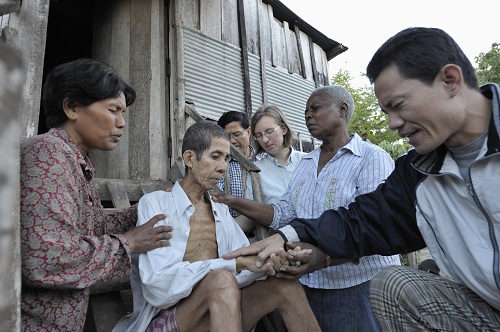 United Methodist mission personnel join with local church leaders to pray for a sick man in the Cambodian village of Pheakdei. The missionaries work with the Community Health and Agricultural Development program of the Methodist Mission in Cambodia. Photos by Paul Jeffrey.